Over the last few months, newspapers have been full of reports about various money-swindling firms across the state. If you missed the news somehow, we have made a poster of such news.

In fact, one can make numerous collages of such news items. Here is what Pavaratty Branch of KSFE created: 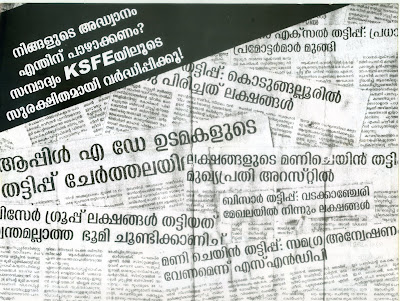 
The same newspapers that carry these news items also carry the advertisements of new financial schemes, chit funds, and kuri companies in the private sector. Such companies promise unbelievable returns for your investment. It's worthwhile to remember that some of the now infamous companies mentioned in the newspaper reports had also provided attractive advertisements in the media. Apple-a-Day, for instance, had even sponsored a reality music show in a TV channel with some of the leading playback singers in Malayalam appearing as the judges.

It is a vicious cycle. First they appear in the newspaper advertisements, and then they become the news. Soon the media will forget about such fraudulent companies. So do most people. Those who lost their hard-earned money in such schemes will remain the only sufferers.

After some months, a new cury company or a money chain scheme props up with their fancy advertisements. Such companies too will eventually make breaking news - only that It will be a heart-breaking news for the customers of the companies. Read a related report here.

Moral of the Story

In financial aspects, an old adage still remains the gold standard: if something sounds too good to be true, it probably is.

We, then at KSFE Attingal Evening Branch, started this blog in 2009. The one question we have been receiving for all these years is this (...

Enroll online for KSFE Pravasi Chitty:
1. Visit https://portal.pravasi.ksfe.com/index.php/home/cust_reg
(Or download KSFE Pravasi Chit app for Android or iOS).
2. Fill in the forms and register.
3. Complete KYC verification. You'll need to upload copies of your valid passport, visa or work/residence permit, labor/national ID, and a photo.
4. You are all set to subscribe chits.